Facebook Timeline is much more than just a redesign.  After using Timeline since the F8 announcement, I’ve had a great time getting to understand this product and what it means for Facebook users.  Here’s why I think it’s so great:

It takes your current data and makes it beautiful

The out-of-box experience for Timeline is great, because it takes data you already have in Facebook and instantly transforms it into something much more compelling.  Nick Felton, the designer behind Timeline, made his name creating beautiful visualizations of his personal data, and Timeline doesn’t disappoint.  Instead of prompting users to add more content, Timeline creates the right incentive to be more active on Facebook- making your content look awesome.

Your data is less ephemeral

Most Facebook users have been on the site for years, accumulating countless photos, status updates, and check-ins.  The current feed only exposes the tip of this data to users, relying on an infinite scrollback to view history.  You can see the problem- while there are widgets for things like Photos, it’s hard to rewind your life more than a couple of months, and the most active profiles are penalized by being the hardest to navigate.  With Timeline, it takes a few seconds to jump to a specific month, and simple to jog back and forth a month at a time.  Compare this to Flickr, where navigating older photos is unwieldy and annoying, especially if you forget to organize your photo into a set for easy access.

For Jig, it was important that we got out of the way of our users.  For instance, unregistered users can do virtually everything on the site, and we don’t ask for a login or registration until after you submit something.  With Timeline, new classes of apps will be able to automatically publish interesting data to a Timeline in an easily consumed morsel of data.  Humans are lazy, and great products act as agents for their users, quietly doing good things as their masters go about living their lives.  “Frictionless Sharing” is not without its perils, so it will be very important for Facebook and the app ecosystem to provide easily understandable privacy settings.  In a world of Nike+ and Fitbit, it would be awesome if my 25 mile mountain hike got published to Facebook, but not as awesome if my 14 hour power nap was put there as well.  Still, personal metrics are a growing industry, and people enjoy showing off how active and interesting they really are.

A stalker’s paradise?  No.

Critics have dubbed Timeline a “stalker’s paradise”, because it makes it that much easier to view specific dates in the past.  To those people, I’d say this- Timeline doesn’t expose additional data about a user, it just makes it easier to navigate.  I’d argue that the criticism of Timeline is a semi-dangerous position to take, because it makes people believe that the old profile is safer than the new one, even though any motivated creeper can use ‘show older posts’ to view another user’s entire Facebook history.  The ease of use of Timeline can also make it much easier for users to find content that they don’t want around anymore and delete it, so this argument goes both ways.  In the future, Facebook could even launch a feature that allows users to block content for specific time periods, now that there’s a UI that makes it easy to navigate.  The moral of the story is this: any tool can be used as a weapon, but that’s hardly a reason to ban it from existence.

To the tl;dr crowd, just watch this video:

Yesterday I received a letter from a Facebook recruiter that was quite nice and professional, but I am clearly not on the market for a new job right now.  I responded with a rejection letter:

Thanks for the connection request.  While I was impressed with your credentials, at this time I do not see an opportunity for me to leave my company to consider a position with Facebook.  Best of luck with your future endeavors.

I’m pretty much screwed now if the startup fails and I end up at Facebook’s door with my hat in hand. 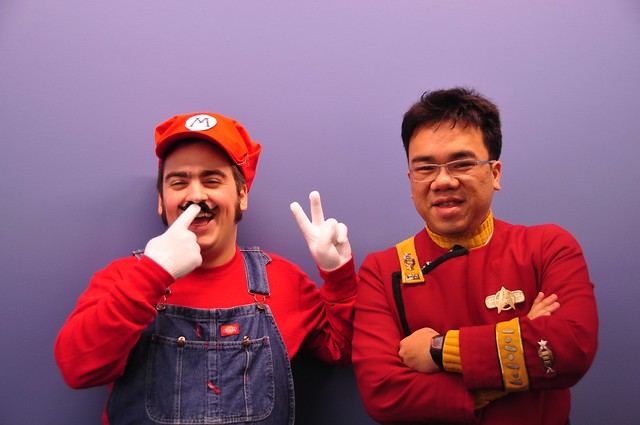 Almost two weeks ago, I had an emotional last day at Mozilla, the best place I’ve ever had the honor of calling “employer.”  The 22 months I’ve spent at Mozilla have been the most rewarding and challenging of my career.  I joined at a time of transition and had the great honor of working with some of the smartest people I’ve ever met, on a mission that has fundamentally changed the internet for everyone, regardless of the browser they happen to use.  Mozilla has a reach and influence that is the envy of many organizations in tech, and they will continue to grow and advance the state of the art in some obvious and surprising ways.

I’ve always told people that Mozilla was the last job I would ever have, and there was only one thing that would get me to leave- the opportunity to start something new that has the potential to change the world.  Of course, like many asterisks and related clauses, this one was fated to happen to me, and when Joshua Schachter asked me to start a company with him, I said no.  I couldn’t leave Mozilla, and I felt that my participation was vital to the company and the very future of the internet.

It took a while for me to realize that there would never be the perfect time for a person to leave an organization where they feel like they’re making a difference.  It took an even longer while to crank my ego down to the point where I realized that no one is irreplaceable, and in fact, learning how to delegate and give others the opportunity to grow is also an honorable way to make an exit.  Upon some reflection, I came to realize, perhaps self-servingly, that being indispensable is not always the reflection of a person’s true value- because it means that responsibility, vision, and leadership are not being shared in any meaningful way.  Fligtar, Myk, and Jorge all know their own jobs better than I do and are more than capable of writing the future of add-ons for Mozilla.

So, we know how this story ends.  I did an Ione Skye to Joshua’s John Cusack, and now I’m the VP of Product at a joint called Tasty Labs, with Joshua and Paul Rademacher, who invented Web 2.0 and will be inventing the next version of the web with us, which we plan on calling “Web 6.” Right now, my days are unpredictable and exciting, and I’ll try my best to talk more to you, all twelve of you, about my startup adventure.  TTFN!

AMO is a great site for finding and sharing your favorite Firefox add-ons, but as we like to say, one size definitely doesn’t fit all.  While we made meaningful improvements for the millions of loyal add-ons fanatics out there, it was clear that the tens of thousands of available add-ons were overwhelming for many users new to add-ons.  Enter Rock Your Firefox- a blog we launched last month that tells folks about the great add-ons out there.

Some of you may know Rock Your Firefox as a Facebook application, originaly created by Justin Scott to help add-ons users share their add-ons on Facebook.  While the original Rock Your Firefox has been retired with fond memories, we decided to resurrect and reinvigorate the brand for the new Rock Your Firefox- where we shine the spotlight on a single add-on while telling a compelling story about how an add-on can make your life better.  We’ve made an effort to try and make these stories fun as well; and we’re actively looking for new guest bloggers to help us tell the story of great add-ons.

If you’re reading this, chance are you’re a big add-ons fan, and some of you have wondered about the reason for a new site.  Rest assured that AMO will continue to evolve in useful and delightful ways, and Rock Your Firefox is intended to complement AMO by offering a low impact and easy way to discover add-ons, whether you’re a new user or a seasoned veteran.  Also- since it’s a catchy URL- we hope that you’ll tell interested strangers to check it out, we’ll do the rest with our witty prose and slickly produced videos. 🙂

Editor’s note: Patricia Clausnitzer has translated this post into Belorussian!

netbooks are the new notebooks

I have two netbooks, a Dell Mini 9 and an HP 5101.  One is my personal machine, purchased back when the netbook segment started to appear, and the other is a machine on loan from Mozilla, as we’re always striving to better understand our users by using hardware that represents what’s being purchased today.

There have been three generations of netbooks since the Asus Eee first appeared in late 2007.  That machine had a repurposed portable DVD player screen and a flexy white chassis.  The Dell was one of the first Intel Atom machines, a computer that packed early 2000’s processing power into a very low power package.  Build quality was markedly better than the Eee, and the screen retained a 16×9 aspect ratio (belying a portable AV device origin) but with a web-usable 1024×600 screen.  Still, with a small keyboard and plastic construction, the machine feels more like a casual device than a real computer.  The HP, recently released only a month ago, has a magnesium chassis and a much larger keyboard.  Its six cell battery and 80GB ssd make it a perfectly usable Vista machine with an 8-9 hour battery life.  The 1366×768 display packs more pixels than a 13 inch macbook on a 10 inch screen.  The entire machine is about 2 lbs and a base configuration is $400.  The machine I’d buy would have the HD display for $25 and the standard 160gb 7200 rpm drive, as the SSD almost doubles the cost of the machine.  I’d go to Fry’s and get a 2GB SO-DIMM for another $20.  I might go with the standard battery for the slim form factor.

If nothing else, the usability of my netbook (even with Vista!) illustrates that there is no Moore’s law analogue in software.  Firefox 3.5 runs faster than Firefox 1.5 does on older hardware, and even operating systems are doing more with less these days.  Windows 7, when it goes on the HP, will be a nice performance upgrade for a machine that seems perfectly fine for everything my parents would use a computer for.

If anything, my netbook experience has shown me that for general purpose computing- the facebooking, twittering, blogging, sharing that most people do- a netbook is a full computer running a full “desktop” operating system.  While I like the room and power of my Macbook Pro, I’ll probably use the netbook for travel, especially once I get a 3G SIM card for it.  My prediction- the netbook/notebook divide is going to disappear as people will be able to do more with less.  I think phone capability will increase, and once they get to the point where they can run cloud based productivity apps, that’s when you’ll start to see netbook form-factor sleeves that add keyboards and better displays to your phone.  In other words- the phone becomes the new netbook.