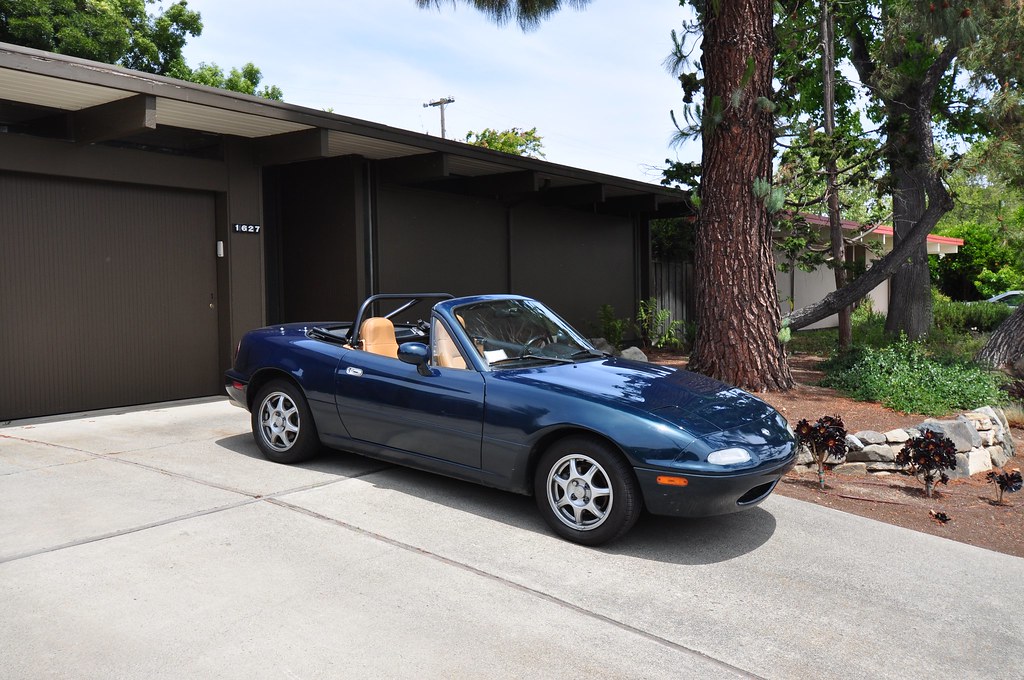 In the 1980’s, a few employees of Mazda of North America convinced their Japanese overlords that there was a market for a small convertible sports car that combined British and Italian panache with Japanese reliability.  This was no small feat, especially since Mazda would have to invest nearly a decade of development into designing and building a rear wheel drive sports car when most of their models were front wheel drive econoboxes.  Making things even harder was their price target: $13,800.

It is one thing to design a sports car with a high price point, because buyers of expensive sports cars do not expect their sports cars to have any sort of practicality, economy, or reliability.  It is another thing entirely to design a desirable sports car at a price that is comparable to a family sedan.  Mazda achieved their goal with flying colors, and management in Japan was more than relieved when the car turned out to be a success.  With the exception of the heavily revised engine, virtually every other component, from the exterior door handles to the double-wishbone suspension, were unique to the MX-5 Miata.

There’s a reason that the Mazda Miata is the most raced production car in the world.   While it is straightforward to add power to any car, it is much harder to create a world class chassis with a sophisticated independent suspension at all four corners.  With the Miata, Mazda engineered a double wishbone suspension at all four corners of the car, which is the optimal layout for race cars but is expensive and complex to implement in a production car.  Combined with the bespoke powerplant frame adding rigidity to the car, the Miata’s chassis is essentially that of a small race car.  Thousands of Miatas are raced in various club races all over the world, and they make fantastic race cars with minor modifications.

Miatas are simple to maintain and parts are inexpensive.  The first generation is the most desirable, as it was a clean sheet design with many charming details that were lost in subsequent generations, like the one finger door handles and headrest mounted speakers for better top-down audio.  The 1999-2004 model is essentially the same car with minor improvements, but most purists prefer the first generation model.  I say that both are fine cars, but at the end of the day, I bought a first generation 1996 Miata.

When shopping for your Miata, try to find a 1994-1997 model.  The 1994 models are the first year for the more powerful 1.8L engine, and there are a host of improvements, including dual airbags and additional chassis stiffening køb viagra.  Manual transmission is the way to go, and for better traction in all conditions, you want the optional Torsen differential.  All manual transmission Miatas in this era with power windows have the Torsen diff.  ABS is also an option, and is hard to find, so make a decision on whether you want it before you go shopping.  ABS cars can be identified by the control module on the passenger side of the firewall replacing the stock washer fluid bottle location.

All Miatas have a VIN sticker on every body panel that indicates whether or not the panel is original.  These are located on the hood and trunk lid, both front fenders in the rain channel on the top, and on the rear fenders on the door jamb.  A car with original stickers all around has never had any major bodywork done.  Hardtops are very desirable and are worth $900-$1000.  Replacement softtops can run from $500-$1000 installed.  If you want to track your car, a roll bar is required, and cost around $500.  Clean cars that require nothing start at around $4000, depending on options.

If you have any interest in learning to be a better driver, buy a Miata.  It is the quintessential “momentum car” that can go very fast as long as you don’t slow down too much.  The car has a weak engine by modern standards but despite this, they are very fast in the right hands.  Since I’ve become an amateur endurance racer, I bought myself a Miata to improve my driving.  It also turns out that it’s a sweet car to drive to work every day with the top down.  I didn’t really fully grok why Miata owners loved their cars so much, but now I do.

Anyone who knows me personally knows that I’ve been dealing with some heavy stuff right now.  Over the last few months, I’ve been balancing the excitement and challenge of starting a company with the end of my marriage.  While things have been hard at times, my friends have really stood by and supported me when I’ve been down køb viagra.

I’m really lucky to have the friends that I have, and I know that my future is one of promise and not one of uncertainty.