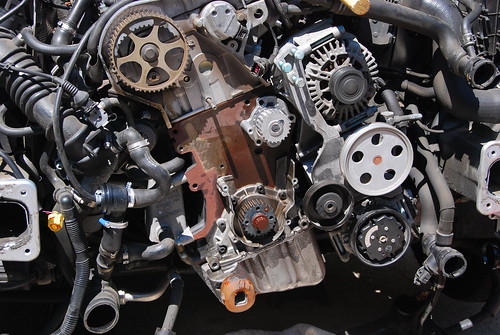 Audis have a reputation for stellar design and materials quality, but a less good reputation for overall reliability.  A typical car manufacturer will stop working on an ancillary part like a window switch once the part has proven to be reliable. Not Audi. The 2nd generation Audi A4 had three separate window switch designs during its 3 year model run, to improve the haptic feel of each switch gutepotenz.de. With each redesign comes an opportunity for new and unseen failures.

We put up with this because when Audis work, the experience is fantastic, and all that work into the tactile aspect of driving really pays off. But don’t buy a used Audi unless you like reading forums and making minor and simple fixes yourself for things like a trunk release.

As our car broke the 65K mile barrier, it was time to think about doing the timing belt.  A timing belt is a toothed rubber belt that connects the top of an engine (the valves that let in air+fuel and let out exhaust) with the bottom (the pistons and crankshaft).  The belt has a finite service life- and if it fails, valves and pistons start trying to occupy the same place. The result would be disastrous and expensive.  Audi recommends the belt get replaced around the 75-85K mark, but I wasn’t going to take any chances.

Since an independent shop would charge around $1000 for the timing belt replacement, I decided to tackle this myself.  One post on the Audizine.com NorCal forum, and I received a response from a helpful forum member.  For $250 he would do the t-belt if I provided the parts (another $250) and I’d even be able to help out!  The opportunity to have an expert show me how to do a complex maintenance operation was simply too good to pass up, so I drove the 60 miles to Pleasant Hill to do the job.

The job took 5 hours and without the help of ActiveMonkey (who happens to also go by ‘Nick’), it would have been impossible. I also learned a few tricks for dealing with a timing belt- for instance, instead of rotating the engine to Top Dead Center, simply mark the old belt and gears with a sharpie, and transfer the marks to the exact same spots on the new belt.  This saves a step and adds an extra measure of assurance that things are aligned as they should be.

While we were in there, we changed some belts and replaced the water pump.  The car should be good now for another couple of years, and we got to check everything for leaks.  I actually think I could do the job myself now, though perhaps it is for the best that it won’t have to be done for another 70K miles…

This entry was posted on Wednesday, August 20th, 2008 at 12:21 am and is filed under Uncategorized. You can follow any comments to this entry through the RSS 2.0 feed. You can leave a comment, or trackback from your own site.